The word Kirtan (pronounced Keertan) means ‘the song in praise of’. It is a call and response form of singing meditation typically shared in Hindi or Sanskrit which is connected to the ancient language of mantra. Mantras are sacred sounds and word formulas that were discovered by poet saints and sages of India over 3,000 years ago.

The Vedas describe 3 systems that build a path towards self-realisation: devotion, knowledge and action. Kirtan forms part of the Bhakti tradition which is known as the yoga of devotion. Its main expression is through the sharing of music and poetry in community.

The Bhakti movement developed in Tamil Nadu, South India between the 7th and the 12th centuries. It originated through the teachings of poet saints who rejected institutionalized religion and did not believe in Brahmin priesthood as the only means to spiritual liberation. In Bhakti what mattered most was the devotion to God regardless of background or occupation. They believed in the equality of all human beings and emphasized the importance of love, compassion and tolerance.

‘Devotion’ means different things to different people. For you that might be God, nature, a religion or any practice that helps you consciously connect to the true self that connects us all. When Dr. Francis Roles (founder of The Study Society) first started to visit his teacher in India he asked about the role of Kirtan at ashram gatherings. H.H. Shantanand Saraswati described Kirtan as an external counterpart to meditation that can help people relieve tension, learn how to ‘attend’, re-charge and become happier:

‘there are different ways of devotion: to study spiritual literature, to sing spiritual songs, to give help to others, to worship, to pray, to meditate. One has only to see that we do it inwardly as well as outwardly (…)The rhythmic sound creates a tempo, or rather subtle rhythm of vibration which unites the body, mind, and heart of people and the come under the influence of high emotion of Higher self (…) after all, music is the extension of the Mantra system.

H. H. described devotional music and song as ‘quality to bring a new orientation of the atoms of which we are composed’. This is a rather wonderful description of the intention behind the art and science of the ‘raag’ (or raga) which is core to the melodic patterns or modes of classical Indian music. The word ‘raag’ in Sanskrit literally means that which colours. In a raga a series of notes are grouped together in order to ‘colour’ different emotions, qualities and states of being in the listener. Ragas are associated with different times of day (8x three hour parts) and seasons. There are well over 300 of them and the study of raag is an extremely complex, ancient and highly developed tradition.

Kirtan compositions use phrases and concepts based on ragas. The chants are designed to help create internal peace, confidence and joy. Kirtan chanting calms restless minds, promotes clarity of focus and helps dissolve anger and anxiety. It is a loving act of kindness that connects us to our true nature and the universal consciousness we all share.

You don’t need to be a good singer to chant. It’s not about giving a performance. The intention of Kirtan is to use the power of voice and mantra to generate a sense of wellbeing and come together as one. 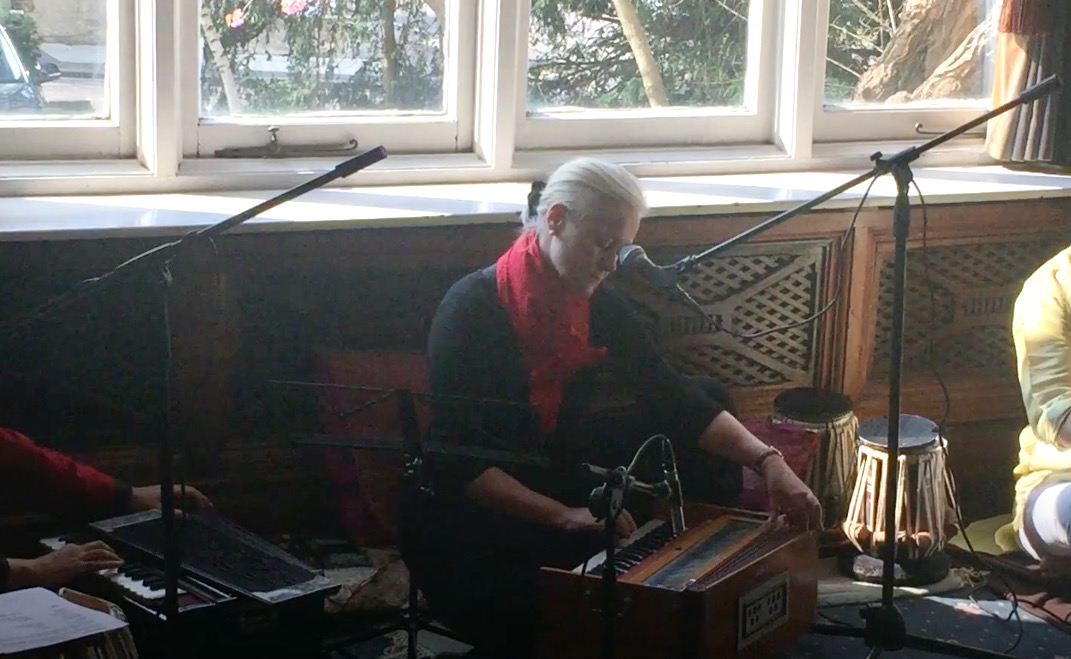 Kirtan at The Study Society

Half hour Kirtans are typically offered by Margaret O’Keeffe twice a month from 6:00pm to 6:30pm prior to silent meditation at Good Company gatherings. Please check this link for the current schedule: